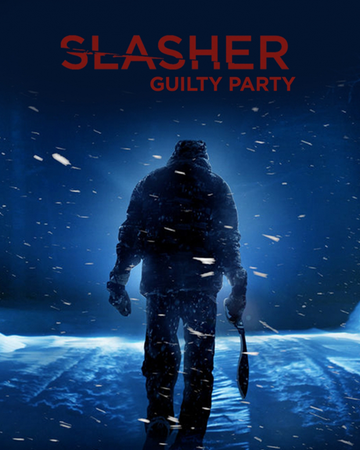 My History With the TV Series:
In 2016, I watched the original Slasher after it was added to Netflix. Slasher is a Canadian TV series that aired on Chiller in the US and on the Super Channel in Canada. I always describe the show as a mature version of the Scream TV series. It’s essentially a slasher movie set across a series of hour long episodes. It’s a strange format for the slasher genre, and to be honest, hasn’t been incredibly effective in any version that I’ve seen, but that doesn’t mean there isn’t some fun to be had. I enjoyed the first season of Slasher, but I felt it ran two or three episodes too long. I didn’t have high hopes for a second season, but I was glad to see Netflix swooping in to bring the series back to the masses. The series returns with new characters, plot, and setting.

Slasher debuted on Netflix on October 17th, 2017, and I watched all eight episodes within the first week of its release. I found the show to be of much higher quality than the first season, but still flawed.

What The Film Is About (Non-Spoiler):
A group of summer camp counselors return to the scene of a crime they committed five years later. Something or someone was waiting to punish them for their sins.

What I Liked About It:
-The snow setting. We’ve heard the rumors of a Friday the 13th movie set in the snow and seeing Slasher only makes me want to see that movie that much more. The blood reflects so well on the snow and the feeling of isolation is incredible. 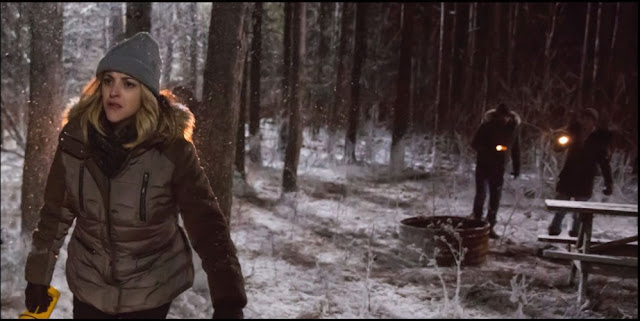 -This season seems to have been inspired by the Playstation 4 game Until Dawn, which is not a bad thing. It has a similar setting and the characters feel like they could have easily fit been cast in that game.

-The cast is made up of several former Degrassi actors/actresses (it is a Candian production after all), and I loved that I only recognized one of the cast members Ty Olsson from Supernatural. Everyone felt familiar, but there were no well-known names which is always great in a slasher.

-The kills were plentiful and gruesome, which is always fun. 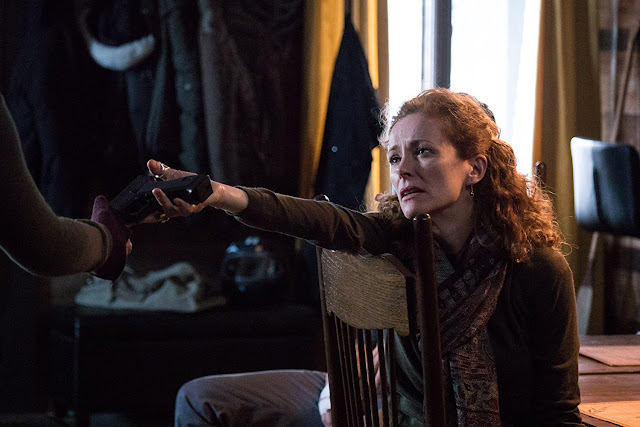 -I don’t try too hard to figure out the killer in movies, because I think that takes away all the joy. I thought the series did a good job of keeping the mystery going and slowly eliminating potential killers along the way.

-I’m not a fan of flashbacks, but I thought this series used them well.

What I Didn’t Like About It:
-In horror movies, sometimes characters are so annoying or unlikable we root for them to be killed. This series struggles with defining who is good and who is evil and I was always conflicted regarding the deaths. I felt like the characters I liked the most (and seemed most interesting) died too soon and I was left with a bunch of people I was happy to see die. It felt uneven and I think a better order to the deaths could have made the series more enjoyable.

-As much as I look forward to these slasher TV series (Scream is a guilty pleasure of mine), the formula for a slasher does not work in this format. Every show suffers from the same problem, they starts off strong, then slow down well too much in the middle, before wrapping everything all up. This show is especially guilty of that. The first two episodes are fantastic, but then episodes three and four are pretty horrible. It almost feels like a separate movie as they go off exploring one of the character’s past and justifying his current behavior.

-The killer did not obey any sort of rules, which was interesting and justifiable in the end.

-Like the first season of Slasher, I felt like this season ran two or three episodes too long. I found myself getting bored by the middle of it, and the final episode was something I had to force myself to get through. It’s not that it was bad, I just thought of things I’d rather watch.

-We know that in horror movies a lot of times the victims do stupid things. It’s just a given and is probably pretty accurate when looking at people in society would do under terrifying circumstances. But in this series, I grew frustrated in how many times someone would run outside in the middle of the night for some BS reason. I don’t think I’ve ever seen such a stupid group of people.

Additional Notes:
-Netflix acquired the Slasher series after the first season. This season did not air anywhere outside of Netflix.

Rating:
When I started Slasher Guilty Party, I was sure it was going to be an eight or nine. In fact, I’d say the first two episodes are just that. However, as the series progressed, it got a little lost and took way too many trips down dead-end storylines. I know this was all sleight of hand for the viewer, but you can only tolerate so much jerking around. Eight episodes is too long for a slasher TV show, whether it’s Slasher or Scream. I think four might be the sweet spot.

Slasher wasn’t a waste of time. In fact, there is a lot of enjoy. Its part slasher, part siege narrative and part murder mystery. It’s a fun way to spend a few hours, but could use some editing and scaling back.

I’d rate Slasher Guilty Party as a three out of five, and say it’s a worthy watch if you love slashers and are wanting something a little different. We don’t get many new slashers nowadays, so we gotta take what we are given.
By Brandon at October 25, 2017
Labels: 2010s, Television