Here at The 90’s Horror Review, I plan on spending most of my time covering horror movies from the 1990s. However, every Halloween season I like to revisit some 90’s sitcoms that featured Halloween episodes and I thought I’d share some quick reviews of a few of these shows. I’ve decided to group these episodes by their particular show and give a few quick thoughts on each. Without further ado, let’s take a look at one of the 90’s most beloved shows around Halloween, Roseanne.

Roseanne is arguably my favorite sitcom of all-time. I love the hijinks of the Conner family and how they deal with the everyday pains of life. I’ve watched the entire series (minus the final season) through four times now and I can still happily pop in any of the DVDs and enjoy an hour or two with my favorite TV family. 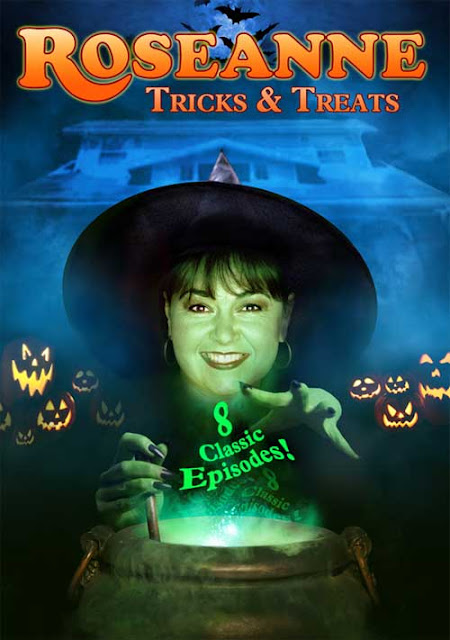 Roseanne was known for making great Halloween episodes. Most sitcoms used Christmas as their big holiday to base an episode around, so Roseanne did what she usually did, and went the opposite way. Christmas was rarely mentioned, yet Halloween was embraced by The Conners. The shows are such fan favorites, a Halloween themed Roseanne DVD was released. The first season of Roseanne did not feature a Halloween themed episode and neither did the final season (well, season nine sorta had a Halloween episode but the less we talk about that the better), but the other seven remaining seasons did. Here are my recaps and a few thoughts (as spoiler-free as possible) of Roseanne’s Halloween episodes. 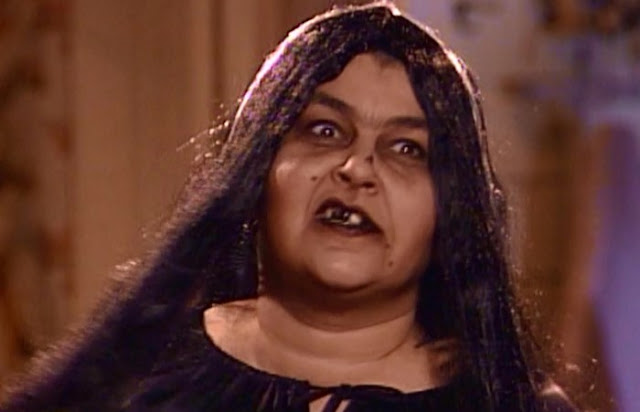 Boo! (Season Two, Episode Seven)
I always forget how amazing the first Halloween episode of Roseanne is. They really went all out. In this episode Dan and Roseanne take turns playing pranks on one another trying to determine who the Master of Halloween Pranks is. The Conner’s set up a haunted house with all the family playing a part in scaring their guests, which include a business partner of Dan’s. It honestly may be the best Halloween episode of television ever.

What I Like About This Episode:
-It really shows how much the series embraces Halloween and isn’t just one big prank set up like many of the later episodes.

-The haunted house is a lot of fun, and anyone who watches this can’t help but want to walk through The Conner’s house and see all the great decorations. 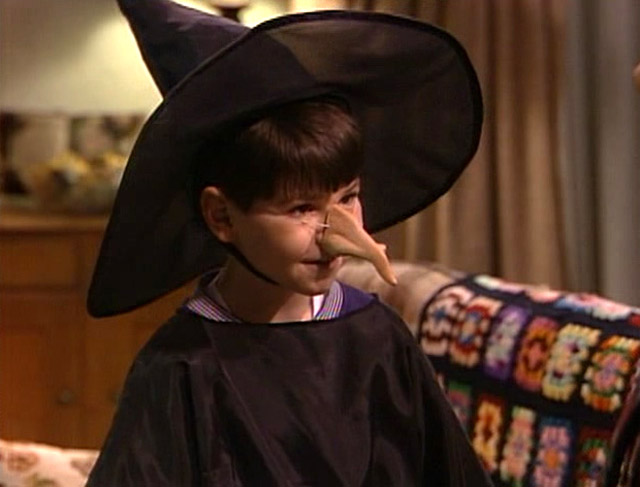 Trick or Treat (Season Three, Episode Seven)
Roseanne and Jackie take DJ costume shopping and he comes back with a witch’s outfit, which embarrasses Dan. Dan is forced to deal with the issue of DJ’s costume at the Lodge’s Haunted House, while Roseanne and Jackie find themselves stranded at the Lobo after the car breaks down. Roseanne is dressed like a bearded man and decides to mingle amongst the guys.

What I Like About This Episode:
-I love The Lodge setting which is family friendly and super cheesy. It reminds me of all the horrible cheap Halloween haunted houses I went into as a kid.

-Roseanne’s scenes dressed as a man are hilarious, especially when she starts causing trouble. 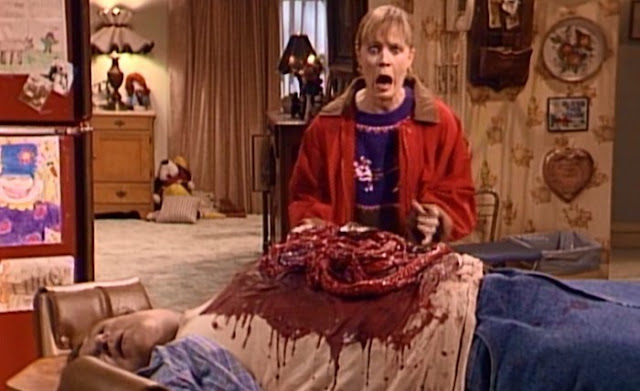 Trick Me Up, Trick Me Down (Season Four, Episode Seven)
Roseanne and Dan play a huge prank on their uptight neighbor Kathy to begin this episode. Kathy doesn’t take it very well, which pleases Roseanne. But when Kathy shows up at the Lodge for the annual Halloween party, Roseanne is convinced Kathy is attending just to get back at her.

What I Like About This Episode:
-Kathy Bowman is so dislikable and seeing her pranked is wonderful. I don’t think it’s very realistic (her coming into Roseanne’s house and all), but still a lot of fun.

-Roseanne’s paranoia is a little annoying at the end of the episode, but luckily it’s eclipsed by a special guest star making his return. 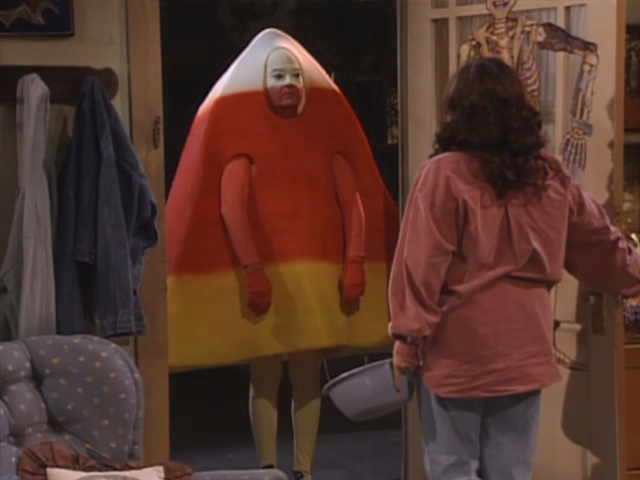 Halloween IV (Season Five, Episode Seven)
Roseanne is bummed about Becky and is not in her usually Halloween spirit. When she refuses to go to The Lodge party, she is visited by the Ghost of Halloween Past, Present, and Future. Yeah, it’s the tired old Christmas Carol template, but it works really well in this episode. It’s our only peek at Roseanne/Jackie as children and also gives us a nightmarish futuristic Roseanne.

What I Like About This Episode:
-Roseanne’s Halloween spirit dating back to her infancy was a lot of fun.


-Roseanne’s reaction to seeing her friends trash talking her cookies and pranks was hysterical. 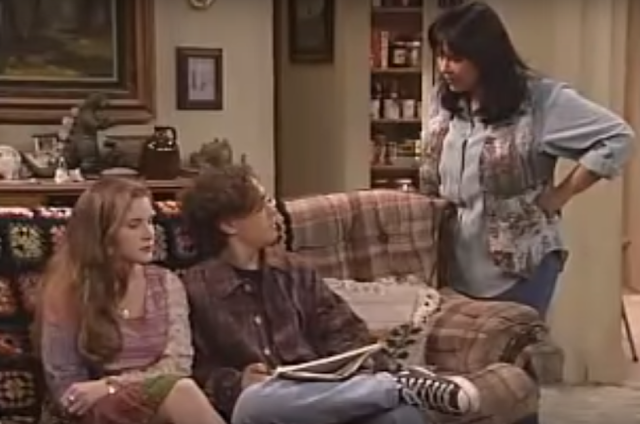 Halloween V (Season Six, Episode Six)
It’s Halloween time again at The Conner’s and Roseanne is put in a big pickle. Darlene is going to a party with a guy at her college, while still dating David. Roseanne feels bad for David and encourages him to find someone to hang out with. However, once David starts bringing a new girl around, Roseanne is devastated at the idea that she may have encouraged David to date someone else. Hijinks ensue.

What I Like About This Episode:
-Watching Roseanne squirm is always fun.

-The mugger scene is fantastic! 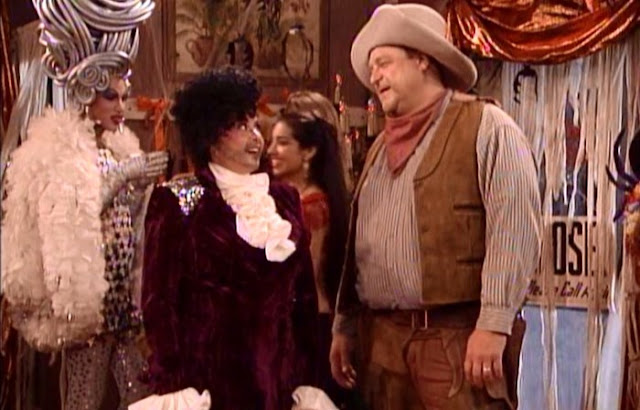 Skeleton in the Closet (Season Seven, Episode Six)
When you start watching Roseanne Halloween episodes back-to-back, you start seeing a pattern which kinda takes away the fun of the surprises. In this episode, Leon is holding a Halloween party at The Lunchbox for his gay friends. He shows a little interest in Fred (Jackie’s husband) which peaks Roseanne’s interest. It seems Fred has a bit of a past when it comes to hanging out in gay bars.

I remember loving this episode the first time I saw it, and considered it my favorite Roseanne Halloween episode. Upon revisiting it though, it doesn’t hold quite as well as I remember, but it’s still a lot of fun.

What I Like About This Episode:
-David attempting to explain gay people to DJ is wonderfully written and acted.

-I loved the payoff at the end. 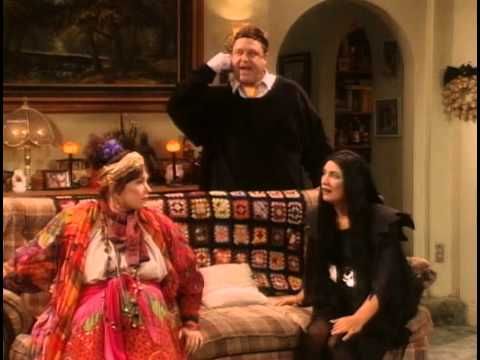 Halloween: The Final Chapter (Season Eight, Episode Five)
This is not a good Halloween episode. I’ll just say that upfront. Roseanne began declining quite a bit in season eight, and this episode is part of that decline. It’s actually hard to summarize this episode because it’s all over the place. Basically, a Ouija board tells Roseanne she is about to go into labor and well… there are dancing, psychedelic hippies and flashbacks to previous Halloween episodes.

-It was nice seeing Roseanne flashback to some of the previous Halloween episodes.

And as I mentioned in the opening, there was something that sorta passes as a Halloween episode in season nine, but as far as I'm concerned, season nine didn't exist nor did that episode. Nothing to see here.
By Brandon at October 24, 2017
Labels: Television