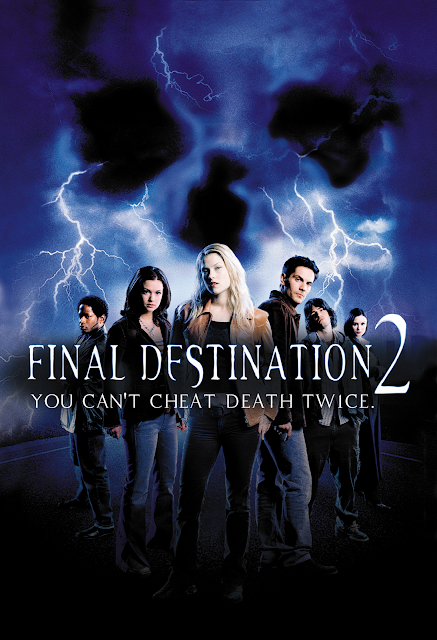 My History With the Film:
Recently, I talked about my fondness for the original Final Destination. I felt like the movie ended well enough and it didn’t need a sequel. Of course, the first movie was successful and it’s a horror movie, so a sequel was green lit and came out three years later. I picked it up on DVD mainly because it had Ali Larter in it. I was/am a fan of her acting and really was interested in seeing where they were going to take her character in another movie.

Of course, Clear isn’t the main character of the second film, but AJ Cook’s Kimberly Corman is. AJ Cook is another actress I became a fan of because of her early work including Ripper (which will be covered in the future) and Out Cold. I enjoyed AJ’s work as the lead actress and found the movie to be equally as entertaining as the first Final Destination, just in a different way. The tension from the first movie was cut back, and in its place was gore and some humor. In all honesty, it works well. I think the reason this franchise holds up so well is that it takes death seriously, but not itself.

Of course, that’s not to say nothing in the film is scary. In fact, the opening scene may go down as the most terrifying and scarring sequence ever put on film. It’s rare to find someone whose seen it and not been affected by it all these years later. In a way, I feel like it was my generation’s Jaws.

What The Film Is About (Non-Spoiler):
On the one year anniversary of the Flight 180 tragedy, Death tips its hand to another person who escapes fate with a group of reluctant survivors.

What I Liked About It:
-I know I just touched on it, but it goes without saying, the opening scene is brilliant. It’s well made with practical effects and CGI that works and holds up all these years later. It’s realistic, scary, and creates a phobia of log trucks for anyone who ever sees it.

-AJ Cook (Ripper) was brilliant and I liked how much Clear (Ali Larter) had developed and come out of her shell since the first film. Tony Todd’s (Candyman) cameo was great as well.

-Some of the deaths are taken lightheartedly and I both liked that and hated it. It allowed for the audience to laugh, which was nice, but it also appeared the director didn’t think he could pull off these deaths without resorting to humor, which was different from the first film.

-The other death scenes were great. There wasn’t one that I didn’t enjoy, however, many of them were quite impractical and not scary.

What I Didn’t Like About It:
-The supporting cast was not nearly as strong in this film. In fact, I felt like Kimberly’s friends in her SUV would have been more entertaining to follow than the group of survivors. Michael Landes really felt out of place in this film.

-Devon Sawa’s absence was only made worse by mentioning him and showing off his newspaper clipping.

-The tonal shift of the franchise was something I enjoyed, but also hated. It was nice to laugh at times (especially the final death) but I would have liked to have experience that dread that the first film conjured up in me.

Additional Notes:
-The Stonybrook Sanatorium where Clear resides is the same hospital used in Halloween Resurrection.

-There are lots of references to 180, the flight number from the first film. For example, the accident occurs at mile marker 180 and there is a road work sign that says “180 feet.”

-Devon Sawa was originally scheduled to return as Alex, but a conflict in his contract made production go on without him.

Rating:
Final Destination 2 is a great addition to the Final Destination franchise, even with the humor and tonal shift it brings. It’s not nearly as effective as the first film when it comes to feeling like “This could happen to you” with exception to the opening highway scene which is by far the greatest moment in this entire franchise, and one of the greatest horror moments in general.

I give Final Destination 2 a three out of five and say it’s a high priority rental.