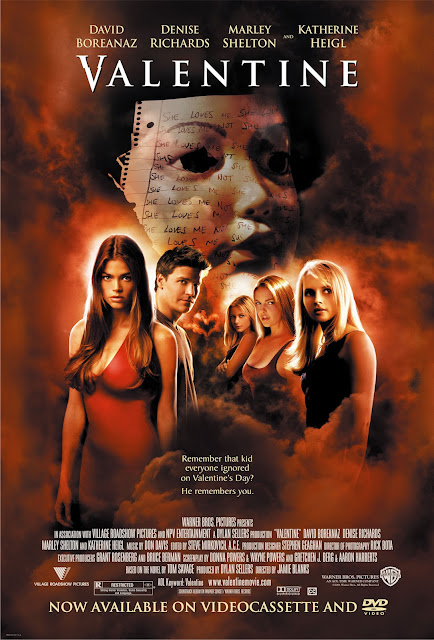 My History With the Film:
I didn’t watch Valentine when it came out in 2001. As much as I love slasher films, I was a little skeptical about this one. It looked pretty terrible to be honest. I believe I only got around to watching it around 2006 when I became a fan of Buffy the Vampire Slayer and Angel. I wanted to see what David Boreanaz (Angel) could do in a horror film.

I was working at EB Games when a copy was traded in, so I bought it for a couple dollars and took it home anxious to see Angel in a Slasher film. I remember trudging through it when I got home and being very underwhelmed. I traded it back in to EB Games the following day since I never imagined I'd ever sit back down to watch this again. Of course, being that this is the first Valentine's Day that 90's Horror Review has been open, I knew it was time to rewatch this disaster and see if it was as bad as I remembered.

What The Film Is About (Non-Spoiler):
A group of women are stalked by a man who they tormented during their childhood.

-Unlike many of the holiday related horror movies, Valentine actually uses the holiday to tell its story. The plot is based around love and you see all four of the main characters going through a variety of different levels in their relationships. The movie builds up to a big Valentine’s Day party, which resembles how the movie begins with a Valentine’s Day dance.

-Towards the end of the film there is a fun kill that involves a hot tub. ::SPOILER:: Paige (Denise Richards) is trapped inside a hot tub with a clear cover by the killer. He then proceeds to run a drill with an extra long bit through the lid and into Paige. It’s by far the best kill in the movie and looks incredible on screen. I’ve never seen a clear hot tub cover, but I imagine these exist.

-This was the early 2000’s, which meant we got to see Denise Richards in a bikini.

What I Didn't Like About It:
-The film is cluttered. What I mean by this is every shot is just full of stuff. I think some of the best slasher films tend to be minimalistic in nature (Halloween, Friday the 13th, The Prowler). For example: there is a big art exhibit scene with dozens of video screens displaying different videos. Obviously, this scene is made to look chaotic, but it takes away from the viewer being able to concentrate on the characters and are instead distracted by the background imagery. Even in scenes inside people’s houses, there is just too much going on and too much stuff in each frame. It’s like the set decorator went nuts trying to stuff anything and everything into every frame. 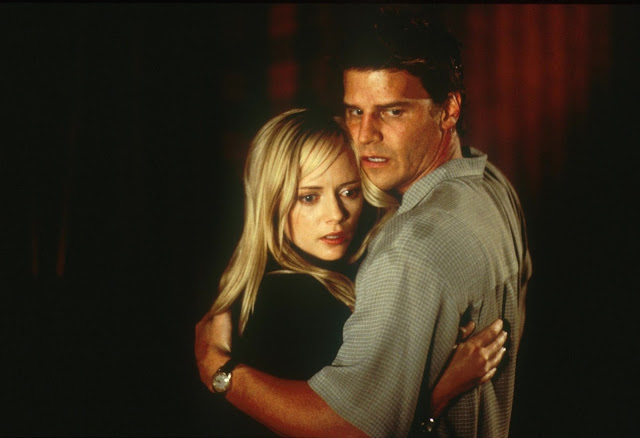 -The movie begins with a dance scene where a young dorky sixth grade boy is rejected harshly by five girls. We then follow four of the five girls throughout this movie and they are supposed to be our protagonists, but to be honest, none of them have grown. They are still all exactly the same as they were in sixth grade, which makes it hard to cheer for any of them. None of the characters are likeable and I believe that ultimately that is what makes this film fail. If anything, you feel more compassion for the killer, but we are never shown his side of the story outside of the opening scene.

-I absolutely loved David Boreanaz in Buffy the Vampire Slayer and in Angel. This was shot while he was starring in Angel, but he shows no real acting range in his first feature film debut. He doesn’t spend much time on screen, and when he is on screen you can tell he’s out of his league. He comes across as a TV actor in a sea of movie actresses and actors.

-Outside of the unlikable characters, I believe the second biggest issue with this film is that it doesn’t feel like a real world. The film takes place somewhere in California (San Francisco I think, if they said I don’t remember), but it doesn’t feel like a real place. In fact, nothing feels real about this movie. All of the sets feel like they exist in some sort of strange alternate universe and were created by someone who was describing what a morgue, mansion, and police stations are supposed to look like.

-In 2007, Jamie Blanks said, "Forgive me for Valentine. A lot of people give me grief for that, but we did our best."

-With only a $10 million dollar budget, this film is the cheapest film to ever have a Superbowl spot.

-Katherine Heigl didn’t read the whole script and in 2005 mentioned that she regretted her decision to take part in the film after seeing the final cut.

-The trailer featured a female narrator which is extremely rare in film trailers.

Rating:
I recall watching Valentine all those years ago and being thoroughly disappointed. I went into the film with an open mind this time around and I still came out disappointed. I ultimately think this film fails because the characters are unlikeable and the setting is unrelatable. It’s not all bad, but the bad definitely outweighs the good.

With exception of the hot tub kill, the kills are very uninspiring and it almost feels like they didn’t want to commit to being a horror film until the final twenty minutes.

I wish I could say Valentine is an amazing movie worth watching every year on Valentine’s Day, but they would be a lie. This film is below average, uninspired and not worth watching unless you absolutely love slasher films. I rate Valentine a two out of five and say skip it.
By Brandon at February 14, 2018
Labels: 2000s, Slashers