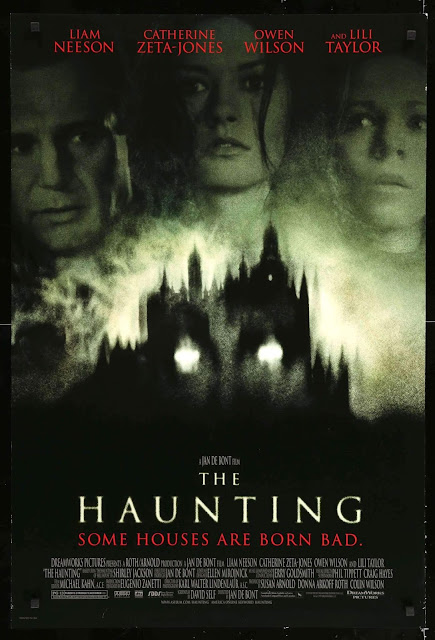 My History With the Film:
In the 90’s, Hollywood had a tendency to release movies with a similar plot within the same year of each other. Godzilla and The Lost World both opened in 1998, as well as Armageddon and Deep Impact. In 1999, Hollywood decided to release two haunted mansion movies: The House on Haunted Hill and The Haunting.

Based on the marketing, I was way more excited for The Haunting than The House on Haunted Hill. The Haunting was directed by Jan de Bont, director of Speed and Twister, two of the 90’s biggest hits. The film featured cutting edge special effects and the incredibly popular Catherine Zeta Jones, fresh off The Mask of Zorro and Entrapment. The Haunting was one of many films I anticipated in 1999 and I found myself in a theater opening weekend to see the big payoff. What I found wasn’t exactly what I expected, but I still enjoyed myself enough to pick it up on DVD a few months later. I revisited The Haunting two or three times, before forgetting about the movie altogether.

The House on Haunted Hill was a significantly better film and a movie I’ve watched at least a dozen times. When I think of late 90’s ghost stories, I think of that, not The Haunting. It wasn’t until maybe a year ago, when my wife was describing a movie with creepy children’s heads built into the furniture that I finally remembered The Haunting even existed. It’s not a movie you see streaming all that often and is definitely not one discussed much in the horror community.

What The Film Is About (Non-Spoiler):
Three insomniacs are invited to spend a few nights in a creepy mansion under the guise of finding new treatment for insomnia, when in fact they are being studied for the effect of group fear.

What I Liked About It:
-The house and production design are fantastic. The house used in this film is amazing. It looks gothic, medieval, scary, and massive. In a way, it epitomizes everything I think about when I think of a haunted mansion. It has a giant fireplace that you can walk into, creepy passages, hidden doors, and is large enough to get lost in. 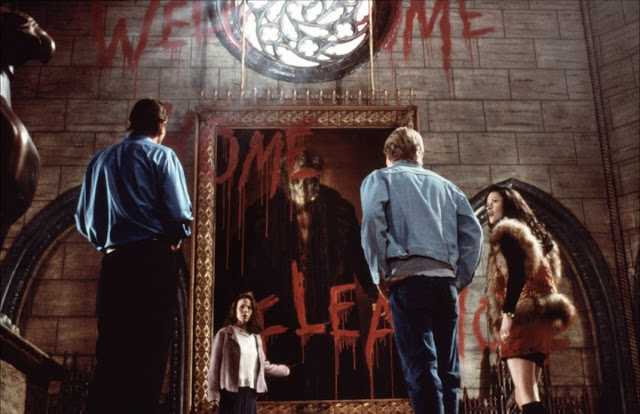 -The filmmakers used the CGI well in this film. Some of it looks a little dated (especially the ending), but when using it for subtle scares it works wonders. The use of curtains, moving statues, and my favorite, the arches in the bedroom turning into menacing eyes, is very well done and holds up well almost twenty years later. It should come to no one’s surprise that Industrial Light and Magic did quite a bit of it. It should be noted that upon its release, critics panned the use of CGI not because of it being bad, but for using it too much. Of course, compared to modern movies, the CGI is used sparingly and doesn’t detract too much from what is on the screen. 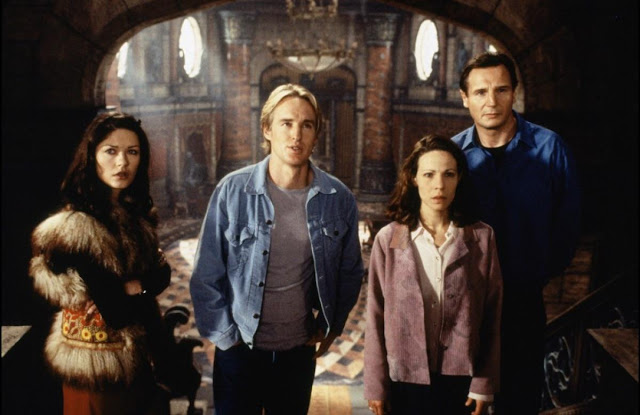 -I love films that use an illness or addiction as a plot point because it always keeps the viewer on their toes. Is this real or is this a result of the insomnia? Is the experiment about fear going too far and taking advantage of this young and vulnerable woman? These thoughts filled my mind as I watched this movie unfold and I believe this constant questioning helped with my enjoyment of the film. 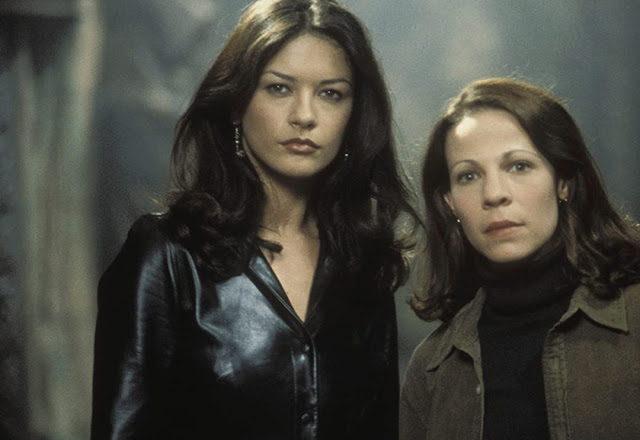 -Lily Taylor’s (Nell) performance is the standout performance in this film. I’ve honestly never seen a role she’s bad in, and although she isn’t the most likeable protagonist, she does a great job creating a believable character that is scarred from years of emotional abuse and looking for something to believe in and someone to take care of. Sadly, her character is not well written and by the end of the film you are sick of her.

What I Didn't Like About It:
-Individually, I really like this cast. Liam Nesson, Catherine Zeta Jones, and Owen Wilson have all shown they are capable of creating some memorable and captivating roles. Unfortunately, none of that is here. All three characters are pretty one-dimensional and Owen Wilson feels really out of place.

-The movie fails to create a creepy atmosphere despite the amazing production design. Everything looks like it should be scary, but outside of one scene (the house having eyes) it fails tremendously. There is no tension or dread to be found in this film.

-I feel like the script went in for a slow burn, but it doesn’t work. The movie moves way too slow, nothing really happens, and none of the characters are interesting enough to care about. The ending also sucks.

-::SPOILER:: The plot jumps in and out of a very interesting idea (a powerful rich man is obsessed with having children and taking care of children, and possibly even killing children). Sadly, the plot ends up bogged down with Nell’s relation to Crane and why she is linked to these children and it all falls apart. No real explanation is given for why Crane wanted children and why he neglected or killed them nor why he still roams this house. I guess the argument is that Crane’s spirit is what kept he children trapped, but it’s pretty damn far reaching, especially when you start talking about the big door depicting purgatory and its role in all of this. Let’s face it, the ending is a damn mess and just doesn’t work.

-I believe in the script there was an attempt to use purgatory as a theme, but it fails horribly.

-::SPOILER:: Early on in the film, Dr. Marrow’s assistant almost loses an eye thanks to Crane’s spirit, and his second assistant takes her to the hospital, but never returns. It’s almost as if the character was created just to drive this girl to the hospital so Marrow didn’t have to leave the house.

-The Dudleys (Bruce Dern and Marian Seldes) play caretakers who you initially believe are in on the whole experiment. I turns out they aren’t, but the characters don’t serve any real purpose. Apparently, the shooting script involved several more scenes with The Dudleys which did not make it into the movie and may have provided some context and depth for their characters.

Additional Notes:
-The house is located in Grantham, England and is owned by The University of Evansville (Indiana). It’s used by the students who study abroad. Some of the interiors were shot in Harlaxton Manor in England and some of the sets were built inside the hangar that Howard Hughes housed The Spruce Goose.

-The original title was going to the title of the novel, The Haunting of Hill House, but with House on Haunted Hill releasing the same year, they decided to shorten it to The Haunting to avoid confusion.

-Real recordings of creaks and moans were played throughout the house to get a natural reaction from the actors.

-The script was plagued by production issues or at least rumors of production issues. A script doctor was brought in to clean up the script and did an uncredited re-write. The cinematographer quit partially though the shoot. Several scenes shown in Behind the Scenes Specials and trailers never made it into the film. And there is even a rumor that Steven Spielberg (whose company Dreamworks distributed the film) directed some scenes or participated in post-production because he wasn’t a fan of the rough cut. This was never confirmed.

-The tagline for this film is “Some house are born bad” which is a line used in Stephen King’s Rose Red mini-series. King wrote the first script for The Haunting, but after some creative differences with Steven Spielberg, he took that script and made Rose Red.

-Another big name attached to this film was director Wes Craven, who dropped out to work on Scream.

Rating:
The Haunting is a mess of a film, which is surprising considering the cast and the director. It’s supposed to be a ghost story, but it offers very little in scares, ghosts, and tension. Outside of the amazing house there really is nothing worth seeing in this film. I now know why I forgot this film even existed.

In order to fix this film, you need a ton of editing, a coherent script, Liam Neeson to give a damn, the characters to actually have purpose, and a much, much better ending.

I tend to look back on the films I review here with rose colored glasses, but even glasses can’t make this stinker look better than it actually is. The Haunting is a two out of five for me and can be skipped. If you want a 90’s ghost movie, pick up its 1999 competitor, The House of Haunted Hill. You’ll enjoy it more than this film.
By Brandon at May 07, 2018
Labels: 1990s, Ghosts