This past weekend, I went thrift store shopping and ran across a VHS tape containing an audio commentary of Scream by Kevin Williamson and Wes Craven.

I was flabbergasted. In all my years of buying, collecting, and renting video cassettes, I’d never seen this particular tape, nor had I ever seen an audio commentary on VHS. Once I got home, I hopped online to unravel this mystery and I struggled to find any real info on this tape or any pictures. There were no listings on Etsy or Ebay and I could only find brief mentions on old DVD or horror movie forums.

Ultimately, I ran across an archived Geocities site from 1998 that helped break down all the ways that Scream was released on VHS and between that site and some random forum threads I was finally able to piece together the release history of Scream on VHS. I thought I’d put together a breakdown here at 90sHorrorReview to make it easier for horror fans to find.

Scream was released for sale on VHS on December 2nd, 1997 almost a year after it reached theaters. I was unable to pin down the exact date that Scream was released in video stores for rent, but I’m pretty sure it was closer to June or July 1997. Back in the 90’s, VHS tapes were not released for sale on the same date of release like DVDs and Blu-rays are. Rental stores often had a six month exclusive for movies before the general public got their shot at owning it. 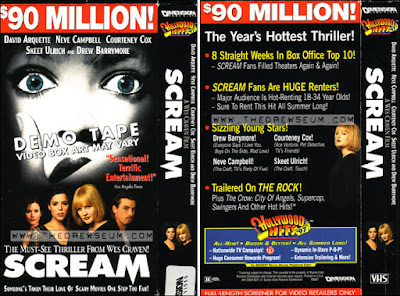 Scream Demo/Screener Tape (1997)
Back in the days of video stores, movie companies would send out "screener" tapes to the stores prior to a movie being released on video. The idea behind this was it was a way to convince the video store owner to buy more tapes and/or to allow employees to pre-screen movies so they could get excited and recommend the film to incoming customers. 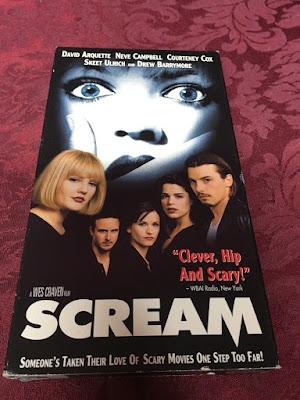 This tape was identical to the rental copy. It used the movie’s poster for artwork and included no extras. It was a simple barebones release like most VHS tapes. 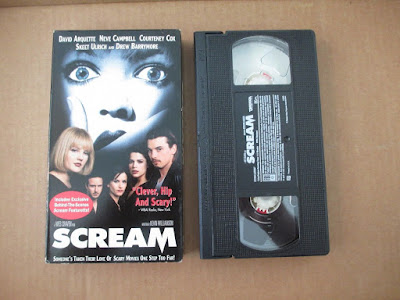 Regular Version with Behind the Scenes Featurette (1997)


The regular “for sale” version looked very similar to the rental version, but it contained a red badge at the bottom left that said, “Includes Exclusive Behind-the-Scenes Scream Featurette!” After the movie finished, there was a short featurette that discussed the film. It was run of the mill marketing stuff. 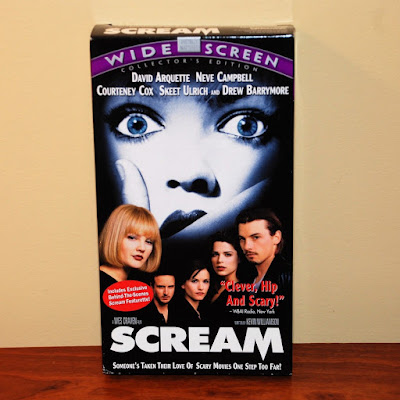 This version of VHS is identical to the Regular Version w/ Behind the Scenes Featurette, but was presented in widescreen, something that was not all that common in 1997. 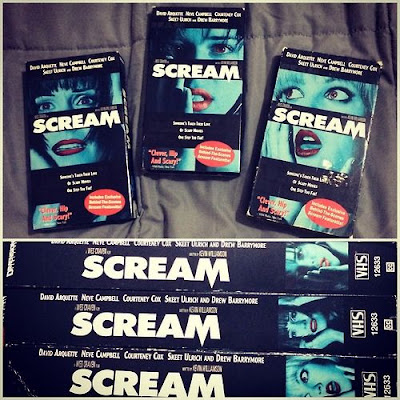 Miramax put out three special covers that went by the corresponding character names: Casey Becker, Sidney Prescott, or Gale Weathers package. This tape included the Behind the Scenes Featurette found on the Regular Version, but it also contained a director’s cut of the film. There was some controversy behind this because Scream was originally rated NC-17 and had to make cuts to reach the R rating. This was not advertised on the tape and it wasn’t supposed to be on there. The director’s cut consists mostly of extended scenes with the most notable being an extended shot of Steve’s guts spilling out. 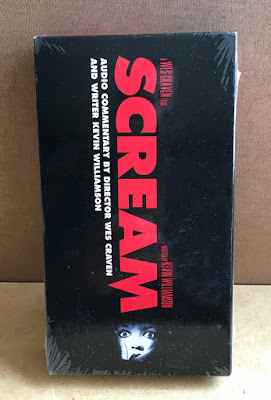 The Deluxe Edition included the Wide Screen Edition tape as described above complete with the Behind the Scenes Featurette. Also included was a second tape of the film in widescreen but this time the audio was replaced by a commentary track recorded by writer Kevin Williamson and director Wes Craven. The package also contained three collectible cards (I believe with the three covers from the director’s cut: Casey Becker, Sidney Prescott, and Gale Weathers) and a ten minute pre-paid calling card. It retailed for around $35 and was made in limited quantities.
By Brandon at May 15, 2018
Labels: Scream