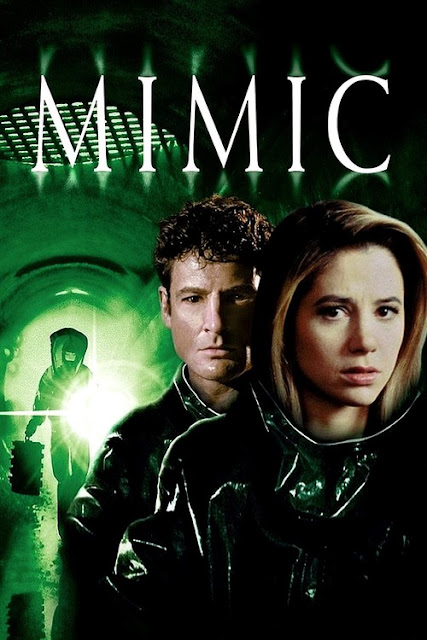 My History With the Film:
I rented Mimic when it first came out sometime in 1998. I don't remember the film having a large amount of advertising and I think I decided to watch it based on the cover art alone. I recall really liking the film, but I don't think I have revisited it anytime in the past twenty years until now.

What The Film Is About (Non-Spoiler):
After releasing a genetically altered cockroach into the sewers of New York, an entomologist is forced to face her own creation as it continues to mutate.

Things I Liked:
-I’ve always been a big Mira Sorvino fan and she really puts on a great performance in this film. She portrays an intelligent entomologist who is troubled by her past actions and her desire to make right by her mistakes. It’s truly one of those performances you see and think to yourself, "Is this performance really going on in this type of movie?" 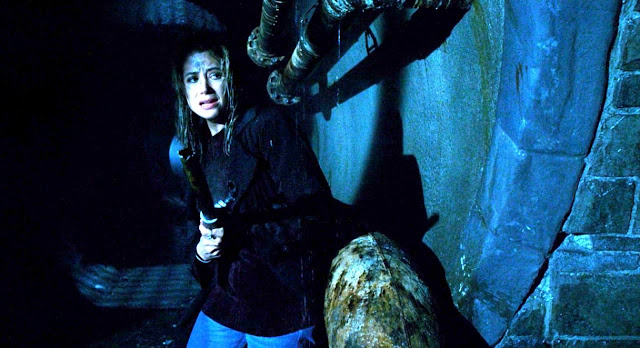 -The sound design is stunning in this film and features a wide variety of different tones, dangles, and clicks. Your attention is drawn to it because the young child in the film likes to mimic the sounds with a pair of spoons, and once it has your attention you can’t help but not notice it. 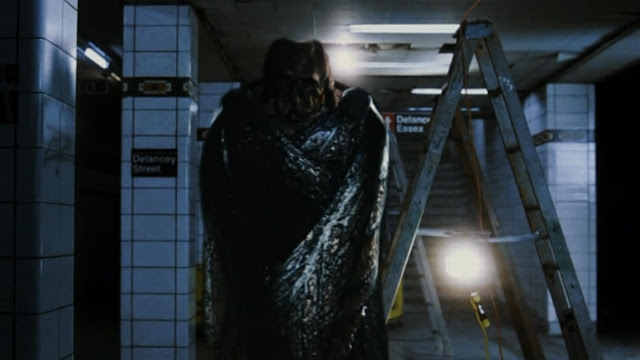 -The creature designs are fantastic and the CGI is quite passable. There are some moments that are very 90’s CGI, but I remember seeing this film right after it came out and was blown away by how realistic everything was. 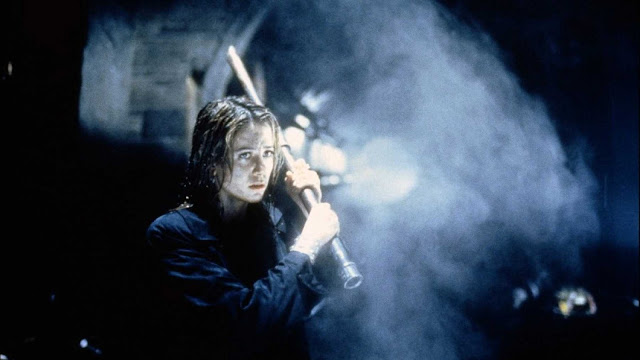 -The abandoned subway setting is something I never tire of seeing and Mimic arguably did it best. I’d love to spend all day exploring that subway station and it was an excellent place to put the finale.

Things I Didn’t Like:
-90’s movies tend to have more happy endings than movies made today. I used to hate that, but nowadays after getting so many tragic endings it’s kinda refreshing. I placed this in the things I didn’t like, because one of the survivors of this film survived what I would call an unsurvivable situation. It made me smile, but also cringe seeing this person walking up.

-The child actor who portrays Chuy (Alexander Goodwin) was phenomenal in his performance. However, the other child actors who show up are really, really bad. They probably wouldn’t have seemed so bad if they didn’t have to counter act Alexander Goodwin.

Additional Notes:
-Keep an eye out for a young Norman Reedus cameo. I watched the film and didn’t pick up on him being in this film.

-During the production, the Weinstein brothers had a constant prescense on the set and threatened to fire director Guillermo del Toro. His job was saved by Mira Sorvino, who threatened to quit the movie should del Toro be fired, and her then boyfriend, Quentin Tarantino also made some calls to allow del Toro to stay on and direct the film. Ultimately, the Weinstein's won out, because they had final cut on the film and they edited the film drastically which caused del Toro to disown the film.

-In 2015, Guillermo del Toro created a director's cut which was released on blu-ray.

Review:
I really, REALLY enjoyed watching Mimic. del Toro has disowned the version I watched because the Weinstein’s took final cut, but I’ve always enjoyed this version and this film. It feels different and its dark and dirty and I love that. I’m really interested in checking out del Toro’s Director’s Cut and might even come back for a second review once I watch it.

Mimic is a fun monster flick that isn’t going to keep you up at night, but will provide you with a creepy uneasiness for ninety minutes. If you dislike cockroaches, this film might affect you more than others. It’s not a movie you’ll want to watch over and over again, but I can almost guarantee you’ll have a lot of fun when you sit down to watch this film. I was shocked at how much I enjoyed it.