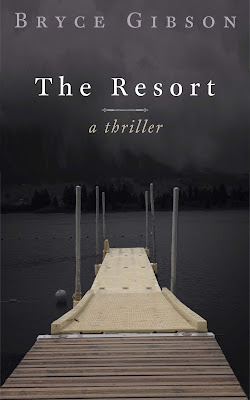 A few months back, I reviewed The Reading Buddy, a 90’s inspired teen horror novel by author Bryce Gibson. It was a fun book that instantly put Bryce Gibson on my list of people to watch for new content. I didn’t have to wait too long since this summer his latest novel, The Resort, is scheduled to be released. Recently Mr. Gibson posted some advance reading copies of The Resort on Twitter and I quickly downloaded the book and finished it in less than twenty-four hours. I found The Resort to be great novel with excellent world building, a spooky atmosphere, and characters that are easy to root for. It’s a perfect combination of the elements I like to find in the supernatural stories that I read.

If you follow my reviews you know I do everything in my power to avoid spoilers. I feel like it’s impossible to discuss this book without spoiling it some, so I recommend you read the book for yourself before reading this review. If you insist on reading further consider this your SPOILER WARNING.

The Resort begins by introducing us to a young man, Mackenzie, who lives on an island off the coast of South Carolina. His parents own the resort on the island that plays host to rambunctious frat boys, celebrities, and other tourists looking to escape the hustle and bustle of city living.

Its spring break and that means the island is full of annoying college kids. While these out of control co-eds party, Mackenzie keeps busy doing chores to keep the resort up and running. Some of his chores include: safety checking the zip line, clearing off kudzu from the cell tower, and processing bike rental paperwork. He’s a bit of a jack-of-all trades and seems like a good kid who is trying to help keep his family business running smoothly, while balancing his personal life which includes his good friend (and crush) Kristen who is also on the island for spring break. He’s trying to gather up the courage to finally make his move and solidly his relationship with Kristen, but that’s only if the island doesn’t get in his way first.

After one college student dies tragically, Mackenzie’s father takes off for the mainland because he believes a local urban legend played a part in the death of this student. Mackenzie and Kristen follow after him and that’s when the story begins to peel back the layers. Is Mac’s dad a mad scientist? Is Mac’s supposedly dead aunt still alive? How does an urban legend about a man with branches for fingers factor into all of this?

If there is one thing I can say about The Resort is that nothing is what it seems. The author does a fantastic job in swerving you in and out of ideas that keeps you guessing the entire time. I managed to narrow down the cause behind all the chaos towards the end, but it wasn’t apparent early on in the book which I really liked. A lot of YA horror/thriller tends to tip their hat at the true cause of the horror in the first chapter and that takes the fun out of the guessing game. I enjoy the chase, and I felt like The Resort kept me chasing almost till the very end.

My favorite part of The Resort was its world building. Despite having lived in the South my entire life, I’ve never been on island like the one described in the book, then again, I haven’t been on many islands in my entire life. The island in The Resort may not exist, but man does it feel like a real place. When I think South Carolina islands, my mind goes to something like area around Murrell’s Inlet and that’s nothing like what’s in the book. Bryce Gibson managed to create an island that feels alive, which was necessary to tell the story he tells. It’s truly an impressive feat, and I credit this wonderful island for providing an excellent backdrop for this story to unfold.

I feel like we got a nice balance of characters, all of which are different, none are too cliché, and all received enough attention in the book that they all felt real and useful. There is only one very minor character who serves no purpose (Justin) whose name I feel could have been dropped and the story would have went on smoothly. I developed enough of a relationship with all of the characters that when approaching the end, I felt empathy for the villain of this story which is usually a good sign of a well thought out story.

One aspect of the story that surprised me was a hint of science fiction that was woven into the plot. I didn’t see that coming, but I’m thankful it was there, because it gave credibility to the pending doom that occurs throughout the final third of the book. I’ll be honest, anything involving plants, (outside of Swamp Thing) is usually an instant turn off for me, but I thought The Resort made a good case for how plant life can be scary when presented in the right story.

I had a couple of issues with story and most of it came once Mackenzie and Kristen arrived on the mainland. I felt like there was a missed opportunity with all the creepy folks out by Silas Harrow site, and I would have loved to seen that explored more before we moved on. It seemed like part of the story was cut out and maybe that scene needed to be trimmed back a little more if we weren’t going to explore it any.

I also had a slight issue with how things were handled the morning after Mac’s father sobered up after running off to the main land. It’s mentioned that they have breakfast, but there is no real moment when Mac confronts his dad or demands an explanation. I understand he’s seventeen, but if I had to take a boat, rent a car and track down my father who is passed out drunk in a stranger’s pickup truck, I’d want an explanation the next morning and wouldn’t just go on business as usual.

My final issue is a bit of confusion. ::SPOILERS:: THIS SECTION RUINS THE ENDING OF THE BOOK SO PLEASE SKIP IT IF YOU HAVE NOT READ IT YET. The plants on the island were controlled by a computer program, but also seemed to respond to Ryan (the spreading of the vines as he walked up to Mac’s house). Was there some sort of mental link between him and the vines. If so, that would explain how all the vines die and free up the island for Mac’s father to be buried. If not, it’s said that the supply boat brings help to the island, but what kind of help? How do you handle all these out of control computer controlled plants, especially after the computer has been destroyed? The ending wasn’t wrapped up in a nice little bow and that’s okay, but I would have liked some clarification on how things went back to normal, well… the new normal for Mackenzie and his mother. ::END SPOILERS::

Overall, I really enjoyed The Resort. In fact, I’d argue that I enjoyed it a bit more than The Reading Buddy. The Resort is a thriller, but like most good thrillers, it has horror elements within it. It’s a fast paced book that is an easy read (in a good way) and one I think most fans of horror/supernatural fiction will enjoy. The ending was well done and comes together fast, intense and is in your face. I love that in a book and it was a great way to end the story.

I’d rate The Resort an four out of five and say it’s definitely worth your time. Pick up a copy when the book is released this coming Monday, June 11th.