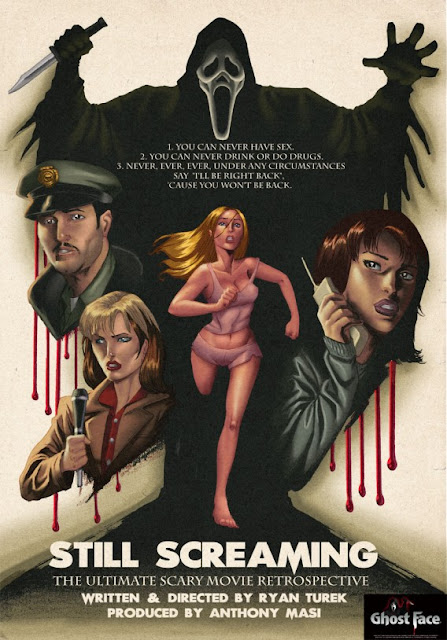 My History With the Film:
Last year, I picked up the Scream Blu-Ray set and was excited to see two new documentaries covering the franchise: Still Screaming and Scream: The Inside Story. I decided to start with Still Screaming mainly because MasiMedia was behind the documentary, and they had previously done Halloween 25 Years of Terror and His Name was Jason, two enjoyable documentaries. I figured they knew how to make a good horror movie retrospective, so I'd start there.

What The Is Film About:
Still Screaming is a ninety minute look at how the film Scream was created and it's sequels.

What I Liked About It:
-The documentary talks to pretty much anyone associated with the production outside of Drew Barrymore, Courtney Cox, Skeet Ulrich, and Kevin Williamson. Most of the interviews are small affairs and looked like they were shot in locations following fan conventions. It's not to say that it's amateurish, but you can tell these interviews weren't all performed in a nice office in a centralized location. It was great to hear from so many different voices with Wes Craven getting a large majority of the interview time.

-The documentary was honest. The cast and crew didn't shy away from Scream 3's short comings which was a relief to hear.

-It was nice hearing stories from Matthew Lillard, Elise Neal, Jerry O'Connell, Laurie Metcalf, and W. Earl Brown. They came to the documentary to have fun and tell stories unlike some of the cast (::cough:: Neve Campbell) who approached the documentary like it was a press junket.

-The filmmakers managed to interview the folks at Fun-World who created the iconic Ghostface mask. It was nice hearing how they came to be involved in the series and how much they take advantage of it now for their business.

What I Didn't Like About It:
-The documentary begins with a Scream inspired opening scene that is atrocious. You can just see someone at the production company going, "Hey, this is the perfect time to make our own take on Scream and call it an homage." It's horrible. It's so campy, filled with bad acting, and almost plays like a spoof more than an homage. This should have been left on the cutting -room floor.

-Half of the film is dedicated to the first movie, while the second half is split between Scream 2 and 3. This means the sequels barely get any time dedicated to them, and Scream 4 is completely omitted since it had not been released yet. I think this documentary would have been better had it stuck solely on discussing the first film and left the sequels for a second documentary.

-Kevin Williamson is sorely missed from the interviews. He was so influential in the creation of this universe and changing the horror industry and not hearing from the man himself hurt the effectiveness of this documentary.

-Some interviewees were shot with a green screen behind them that then had a flashing/moving Ghostface. It's distracting and at times almost seemed like a trigger for a seizure.

Review:
Still Screaming is a perfectly adequate Scream documentary, but it never seems to crossover into being a good or great documentary. It feels rushed in production (no doubt to release it in time for Scream 4) and also in runtime. Ninety minutes to cover three movies is just not enough time, and the documentary doesn't feel complete since Scream 4 was not discussed.

I hold the Scream franchise is high regard and I think it deserves a high quality documentary like Crystal Lake Memories or Never Sleep Again, but this documentary is no where near that quality of those. I'd rate this film as a two and a half out of five and say watch it if you are a huge Scream fan, otherwise skip it.
By Brandon at July 01, 2018
Labels: Documentary, Scream