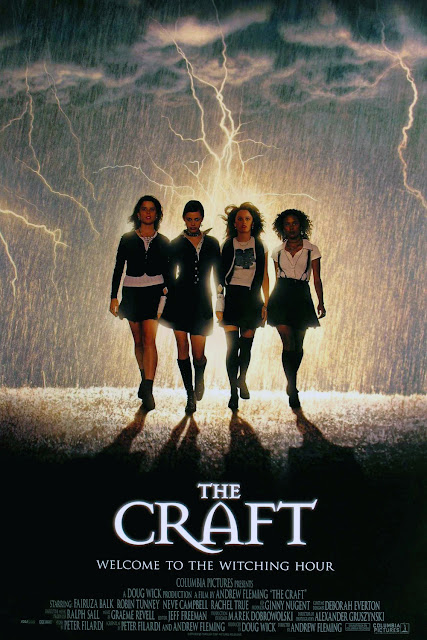 My History With the Film:
The Craft was so cool. It came out the year following Clueless and was sort of the anti-Clueless. It featured four goth girls being bad, dabbling in witchcraft, and torturing the type of girls who’d hang out with Cher and her other clueless pals. It was marketed with a great trailer and a killer soundtrack, which set the stage for a great film.

Luckily, the film was as good as its marketing and I remember buying it on VHS as soon as it was released. The film made me fall in love with Fairuza Balk and also made it hard for me to buy Neve Campbell as the hero in Scream released six months later.

I’ve revisited The Craft maybe six or seven times of the years, and I always find it enjoyable.

What The Film Is About (Non-Spoiler):
A young woman moves to Los Angeles where she meets a trio of witches who help her realize her true power while enforcing their own.

What I Liked About It:
-The casting is perfect in this film. Robin Tunney, Fairuza Balk, Neve Campbell, Rachel True, Skeet Ulrich, Christine Taylor, and Breckin Meyer all do amazing jobs in their roles. I never appreciated Neve Campbell’s performance until this most recent rewatch and was enthralled with her evolution from shy class freak to arrogant hottie. Skeet Ulrich also does an amazing job going from nice guy to dirtbag to love obsessed psycho. 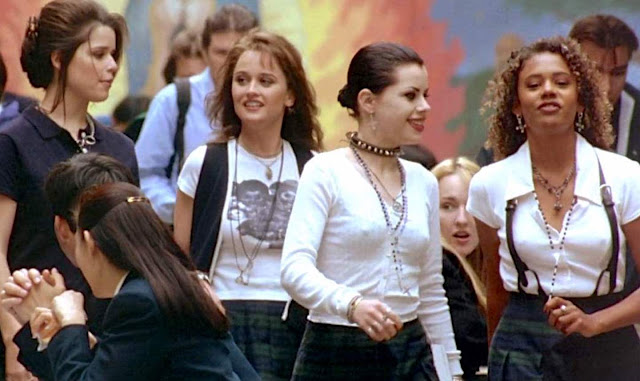 -The film does a great job at building sympathy for the witches by showing all of the issues they deal with (being poor, being a minority, being scarred). This helps rationalize why they desired the power to do spells and make their lives better. It also makes it understandable when they go too far. 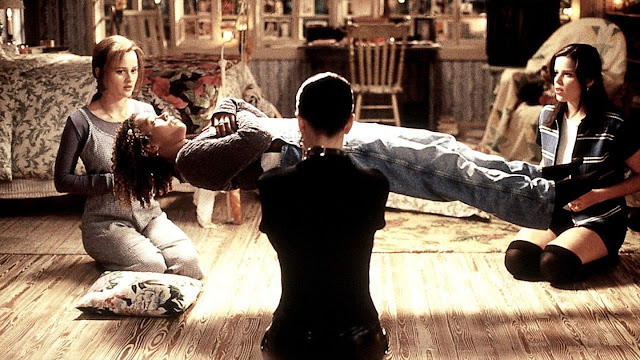 -The sleepover scene is particularly well done and it truly feels like you are just an observer inside a high school sleepover. The way the girls joke, interact, and talk just feels naturally, even leading up to the light as a feather stiff as a board scene, which is well done and filmed beautifully.

-There is a horrifying scene towards the end where Sarah (Robin Tunney) goes into her house and finds it full of all sorts of bugs, snakes, and creatures. Real snakes were used and from my perspective, real bugs. It’s impressive how many creatures they actually got all in one spot.

-CGI is used, but sparingly. Lots of the practical effects are very well done. The skull cap that Christine Taylor wears to show her losing hair is haunting. The scar tissue on Neve Campbell’s body is well done and I particularly enjoyed the scene where the scar tissue begins to come off.

-The music! Man does this film have a great soundtrack.

What I Didn’t Like About It:
-This comes up commonly with these reviews, but the CG in some spots is really bad, especially in the final act.

-Nancy’s (Fairuza Balk) scene following her invoking the spirit scene really should have been cut. I think they wanted to show that she had some sort of power in her, but her overacting and insane antics just doesn’t go over well, especially when she starts rubbing on a dead shark.

-Robin Tunney’s wig is all over the place. Some scenes it looks fine and in others it’s horrible.

Additional Notes:
-The film was planned to be a PG-13 release, but because of the plot involving teenagers and witchcraft the film was rated R.

-Love Spit Love’s cover of The Smith’s “How Soon is Now” found on The Craft’s soundtrack was used as the theme song for Charmed, a show about three sisters who are witches.

-Fairuza Balk is actually a Wiccan.

-Both Neve Campbell and Skeet Ulrich star in The Craft as well as Scream, both released in 1996.

-In Fangoria 153, Rachel True discussed how the film undertook to some major changes following a test screening. "They put in a lot more special effects, revamped the ending and made the final conflict in the movie a little more heightened. Now you get a bigger sense of the struggle between good and evil. The evil is so strong in the film that they had to tone it down a bit to let humanity know that good can trump in the end." 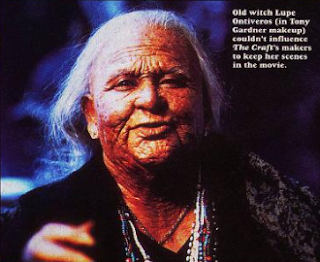 -Fangoria also mentions that there was a "old, wised witch" Lupe Ontiveros (Tony Gardner in makeup) that helped the girls right all their wrongs, but this character was cut out and all her important lines were given to Lirio (the shopkeeper).

-A couple of the cast members had roles in other notable horror films:
Rating:
The Craft holds up well as a very enjoyable witchcraft movie. It’s not scary and I struggle to call it horror, but I think it’s a worthy (although neutered) addition to the genre. The performances alongside the awesome soundtrack make for a very 90’s experience that has substance. I enjoyed The Craft on my most recent rewatch possibly more than ever and feel like the movie is a very solid four  out of five and is a worthy rental.
By Brandon at March 07, 2018
Labels: 1990s, Teen Horror, Witchcraft