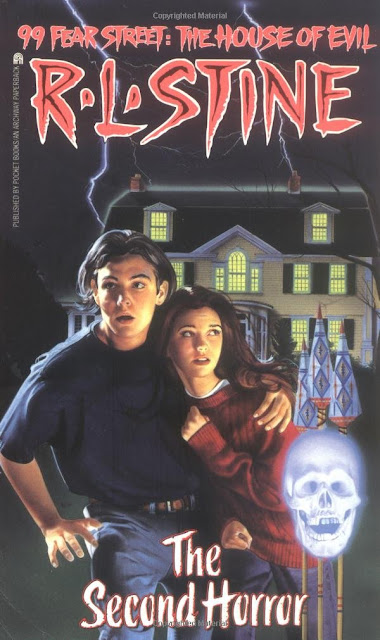 A couple of months ago I reviewed my first book here on 90’s Horror Review called The Reading Buddy. I had a lot of fun discussing the 90’s homage, and thought it would be interesting to go back and pick up an actual 90’s teen horror book. So, I took a trip to the used book store and ran across some Fear Street books, and like a mature adult, I picked out the one with the best looking cover. I took it home and dived right in, and let me tell you… I had a ton of fun. I don’t know why I skipped over these books as a teenager, but at least in this case, the book feels like a more mature version of a Goosebumps book and I like that. It’s easy to read, short, and just something fun to flip through when you got a few moments. I went back to the bookstore and picked up several more, along with some Point Horror books that I plan on reviewing in the future. Until then, enjoy my review of my first Fear Street book, The Second Horror from the 99 Fear Street: The House of Evil series.

My History with the Book:
I remember loving the front covers of the Fear Street books, but I never actually popped one open and read it. I believe that I felt like they were a little beneath my reading level and I just preferred to read Stephen King if I was going to read horror. My stupid arrogance caused me to miss out on a fun series of books during a time when they were mass produced and available everywhere. As I mentioned earlier, this is my first Fear Street book and I read it over the course of a week in March 2018.

What The Book is About:
Brandt McCloy and his folks move into a house on Fear Street with a troubling past. Things seem to go well for Brandt after he catches the attention of three young women in town, but what he doesn’t realize is that he’s caught the attention of a fourth: Cally Fraiser a ghost who haunts his new home and is insistent on destroying him and everyone close to him.

What I Liked About It:
-This book is actually the second book in a series of three books. Despite picking up the second book without having read the first, I was able to pick right up and enjoy the story. I’m not sure if the first book would have enriched the story for me, but I never once felt lost or out of touch with what was going on.

-Brandt’s a likeable average guy. It’s strange because usually when dealing with teen entertainment, you see things from the perspective of a nerd or the school hero. In this book, Brandt is very normal. My reaction to him and what he does at times is very neutral. For example: when he begins garnering the attention of several ladies, Brandt isn’t overly impressed nor is thanking his lucky stars. He’s just very neutral about the whole thing, which is strange to see, but refreshing.

-The book starts off with an act of “accidental” violence that is damn graphic and was unexpected, especially when reading the book with my cat napping next to me. It helped me realize that Fear Street wasn’t Goosebumps and this RL Stine was less restricted in how he approached horror.

-Technologically we are in an age where most of our gadgets can help prevent horror from happening, or at least can get us help when it starts occurring. This is an issue that everyone working in horror has to deal with by either finding a way to disable technology or acknowledging it and working it into the narrative. It’s refreshing to read a horror book that doesn’t mention texting and where you feel like the characters are really cut off from one another unless they are in the same room.

-The story had a twist at the end that I didn’t 100% see coming. I knew something was up by the constant teasing of something being wrong with Brandt, but I really thought the twist worked and was a lot of fun. It kinda gives you a Tales from the Crypt type vibe.

-I’ve noticed over the past several years that my attention span has grown smaller when it comes to reading. I’m great with short stories and small novels, but I rarely bother with anything over 400 pages anymore. Fear Street books clock in a little over 100 pages and they are a fast, easy read. Many of the chapters end mid-scene as a sort of mini-cliff hanger that keeps you reading. This isn’t so much a review of the book itself, but of the format and I absolute love it.

-When you write a 120 pages book, you don’t have a lot of room for character development. I’m actually okay with that. I would prefer to read 120 pages of shallowly defined characters than 300 pages of masterfully written backstories and motives when it comes to a horror story.

What I Didn’t Like About It:
-Horror, especially teen horror (well any teen entertainment in the 90’s), tends to be a bit cliché at times. You have the nerds, jocks, pretty girls, pretty girls who think they are ugly, etc. etc. Outside of Brandt, The Second Horror does nothing to break this tradition. I’m not saying it’s needed, but it would be nice to read a character that didn’t act exactly the way you expected them to act.

-I’ve never been a fan of island/indigenous folklore when it comes to horror and while this worked as a great vehicle for some of the plot, I’m just not a fan.

Rating:
To properly review The Second Horror, I have to looked at the book and story from a proper point of view, that of a 90’s teenager. It would be easy to look at this book and criticize it for being short, lacking true development, and not bringing enough horror, but you must look at the audience this book was written for and the time that it was written. With that being said, if you are a grown adult with no nostalgic memories of these type of books or someone who prides themselves on only written “intellectual” type books, then this is a definite skip for you.

For someone like me, who loves 90’s horror and missed out on these books, this is a goldmine. It’s an untapped resource of 90’s horror for me to experience for the first time all over. This wasn’t Stephen King and I know that and I’m okay with that. The Second Horror was a quick, easy read that gave me some small frights and entertained me quite a bit. It reminded me a lot of Are You Afraid of the Dark, just a little darker. I rate 99 Fear Street: The Second Horror as a seven out of ten and say it’s worthy of picking up for a buck or so if you want something different to read.

By Brandon at September 29, 2018
Labels: Literature