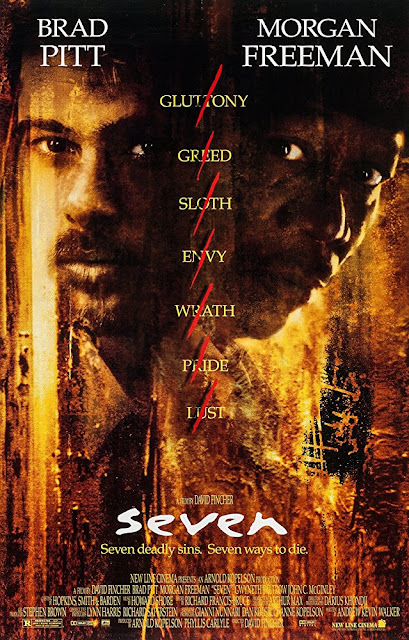 My History With the Film:
I was thirteen years old when Se7en came out and once the movie hit video my dad rented it. He was always a big fan of serial killer movies and Se7en looked like something he’d really enjoy. I sat down with him on a rainy Saturday afternoon and neither one of us were prepared for what we were about to see. Sometimes you’ll hear movies described as unflinching, but its rarely applicable. With Se7en, it’s quite fitting.

I re-watched Se7en in August 2018 and found the movie to still be incredibly powerful.

What The Film Is About (Non-Spoiler):
A young detective partners up with a retiring detective to track down a serial killer who is using the seven deadly sins as motivation.

What I Liked About It:
-The atmosphere this movie creates is amazing. It’s dirty, rainy, and hopeless. I rarely watch a film and come away with total despair but this film does that for me. It turns on a mirror on the worst parts of humanity, life, and the world that we live in and for two hours it makes you stare at it without ever letting up.

-The acting is phenomenal all around. Morgan Freeman does an incredible job as the desensitized veteran, Brad Pitt is the wonderful overly anxious up and comer demanding respect, Gwyneth Paltrow is the sweet and frustrated wife of Brad Pitt, and the killer is exceptional in his performance as well.

-The horror and gore in this film are things that will stay with you. Thankfully CGI wasn’t used all that much in 1996 and the deaths were all practical from what I could tell. And whoever designed them spent hours pouring over pictures of actual corpses because the work here is believable and not easy to look at it.

-The twist. I won’t say more, but the twist.

-The story is simple, very noir, and well told. Director David Fincher is an amazing storyteller and I still consider this his masterpiece.

-Things feel real in Se7en. You’re watching a film about horrendous crimes, but everything feels like is actually happening, almost like it’s a documentary that you are getting to peak in on. I think Fincher’s unwillingness to turn the camera away from the difficult moments creates this unique feeling. And I’m not just talking about crime scenes, but the dinner scene really stays with you as you get to see a different type of pain from all three of the main characters.

Additional Notes:
-The New Line executives apparently hated the ending, but Brad Pitt refused to do the film if the ending was changed. 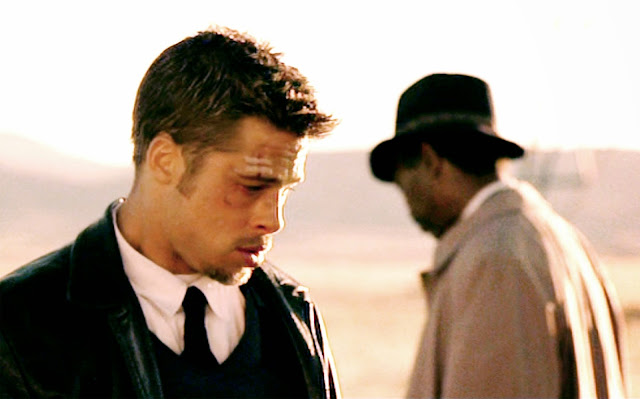 -During the scene where Mills (Brad Pitt) chases John Doe, Brad Pitt fell and his arm went through a car windshield and he had to have surgery to repair it. The accident was worked into the script.

-All of John Doe’s books were real books written for the film. They cost $15,000 dollars to make and it took two months to complete them.

-Brad Pitt bought his own ties for his character. He wanted him to appear to have bad fashion sense.

-Brad Pitt did the film to escape the typecasting of heartthrob that he had received after doing Legends of the Fall. -David Fincher did the film only because he could control the movie since his experience on Alien 3 was horrific and plagued by studio interference.

-No one expected Morgan Freeman to sign on, but he did so eagerly. 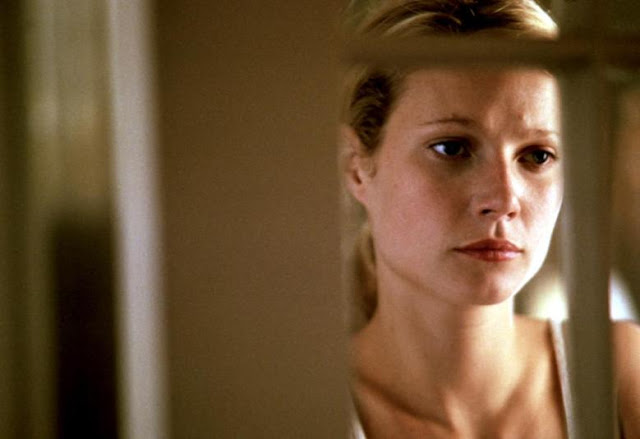 -Seven crates of cockroaches were brought onto the set for the gluttony victim. The actor, Bob Mack, had his nose and ears plugged to keep them from crawling in, but they still managed to work their way into his underwear.

-The dark look of the film was accomplished by bleach bypass, which occurs when the silver in the film stock is not removed, so it deepens the dark images, and increases the overall tonal quality.

Rating:
Se7en is one of those films that is perfect to me. There is nothing I would change about it. The casting, the cinematography, and the story are all top notch. The only question one might have about this film is my inclusion of it as a horror film. Serial killer films fall into a strange territory that is part horror and part thriller, and this film is no different. There is obvious gore and even a giant jump scare, but is it truly horror?

I’ve never been able to make up my mind about the thriller/horror category. I really think its up to the individual to determine whether its horror or not. Personally, I would not classify Se7en as horror, but since I think a lot of people would I felt like it was a worthy addition to the site.

Se7en is a five out of five from me and is a must see. It’s not a movie I’d watch annually, but it is an amazing film that holds up well over twenty years later.
By Brandon at September 26, 2018
Labels: 1990s