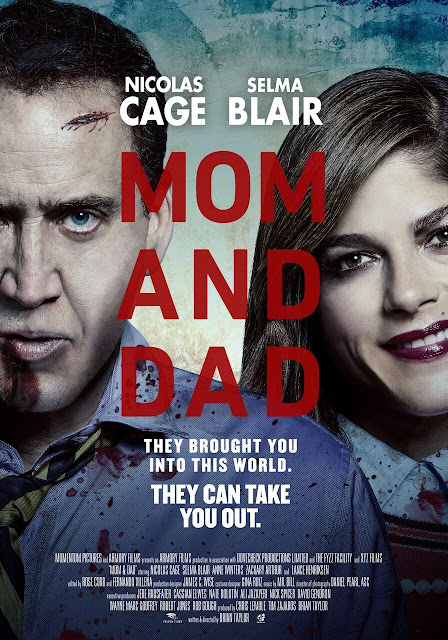 My History With the Film:
I first heard about Mom and Dad on Horror Movie Podcast sometime in 2018. It was described as an out of control film that really catered to Nicolas Cage’s ability to act insane. I looked for the trailer shortly after hearing this and noticed the film was a black comedy with horror elements that looked like something I might enjoy. It wasn’t a high priority to see it, but I figured I’d check it out sometime or another.

In February 2019, I was browsing Hulu and decided to finally give Mom and Dad a shot. I found myself entertained, but not overly impressed during the course of the film.

What The Film Is About (Non-Spoiler):

Something triggers parents throughout the world to suddenly have an urge to kill their children.

What I Liked About It:
-The film has one great scene where the parents are trying to get to their children at school and are being held back by a chain length fence and some police officers. It reminded me of a zombie movie, but the fact that these innocent looking parents were actually blood thirsty maniacs really created some tension, especially with children involved.

-Nicolas Cage is always great as a crazed maniac and this is no exception. His finest moment comes in a rant about becoming a middle aged man in a flashback. Too bad the lack of a decent plot really made this scene completely irrelevant. Still, it’s Nic Cage ranting about getting ear and nose hair.

What I Didn't Like About It:
-Almost all of the deaths occurs off screen or are very minor. The budget for gore was obviously limited, however the couple of times it is used it was used well.

-The film spent too much time trying to create a story worth caring about and it fails horribly. Once the movie finally gets going and the craziness ensues, the film is much better off. Sometimes you just gotta know when to say, “This film is just about screwed up stuff and let us show it and allow people to enjoy it without trying to make them feel attached.”

-Some of the school scenes were shot in Louisville, Kentucky.

-Nicolas Cage said this was his favorite movie in ten years that he had filmed.

Rating:
Mom and Dad wasn’t terrible, but it certainly wasn’t good either. I’d rate it a two out of five and say it’s a rental if you are a huge Nic Cage or Selma Blair fan, and to skip it otherwise.
By Brandon at April 01, 2019
Labels: 2010s