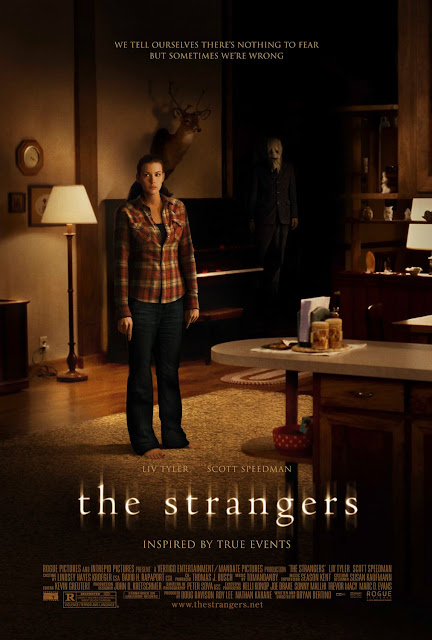 My History With the Film:
I’ll never forget watching The Strangers trailer for the first time. It was intense, creepy, and really stuck with you. I decided to re-watch The Strangers once it began streaming on Netflix in September 2018, but once the film began I realized that I had never seen the movie. I’m not a huge fan of home invasion flicks, mostly because they tend to drag, but I enjoyed The Strangers for the most part.

What The Film Is About (Non-Spoiler):
A couple are stalked late one night by three mysterious masked individuals.

What I Liked About It:
-The Strangers has a very eerie vibe to it. You can see this in the trailer and it continues throughout the film. There is some great cinematography and fantastic use of simple, yet creepy motions that keep you uneasy throughout the entire film. 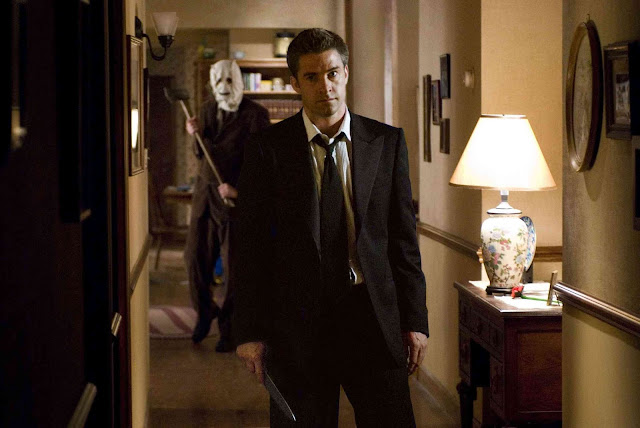 -Liv Tyler really goes all out and makes this movie her own. I remember being shocked that she was in The Strangers, since I assumed horror was a stepdown from what she was used to acting in. Luckily for us, she did The Strangers and really brought her A game.

-I’ve mentioned it before, but what really gets me in a horror film is the use of uncontrollable sound. I don’t think there is anything more terrifying than a horrendous sound that you just cannot stop. In the first real invasion scene, there is a mashup of sounds that plays out wonderfully and really stressed me.

-The mask designs were all simple, creepy, and different enough that you could tell what attacker was doing what. 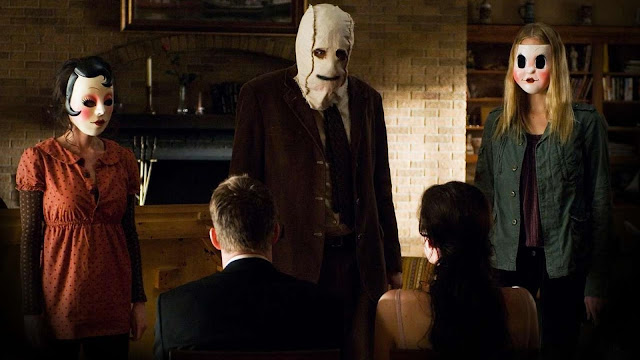 -I loved the wrap around story that begins and ends the film.

-The movie was shot in handheld and it works. There’s that light documentary film to the shots that immerses you, but doesn’t distract you from what’s going on in the scene.

What I Didn't Like About It:
-Home invasion films tend to follow the same formula in that the attacks come in waves. I find home invasion films terrifying for about an hour, but after that I start reaching for my phone. The Strangers is one of those films that punishes you for not paying attention by providing so many creepy details in the background, but that isn’t to say that the film doesn’t drag in spots.

-You pretty much know how the film ends based on the opening scene. This took away the mystery of whether not our protagonists survive and I couldn’t help but think this hurt the effectiveness of some of the scenes.

Additional Notes:
-The exteriors were all shot on an actual farmhouse with a barn and long road, while the interiors were shot on a soundstage.

-In order to get authentic screams from Liv Tyler, the director would tell her where to expect a sound and then have it come from a different direction.

Rating:
The Strangers is the perfect film to watch while home alone late at night, preferably out in the country somewhere. It’s a movie that makes you uneasy and feels like it could really happen. Towards the end you almost get a Last House on the Left sort of vibe that these are just some sick individuals that you know exist somewhere, but hope you never run into.

I rate The Strangers as three out of five and say it’s worth a watch. It’s not going into any regular rotation for me, but I did enjoy my time with the film.
By Brandon at July 17, 2019
Labels: 2000s