Hello there, my name is Brandon and this is my little horror spot on the web. This blog started off in September 2017 as The 90's Horror Review and was branded that until March of 2020 when I finally decided to slap my own name on it. I did this for two reasons:
Who is Brandon?
I'm a simple guy in my mid-thirties who loves horror films, pro wrestling, video games, reading, 80's and 90's stuff, music, and more. I've been creating webpages since the mid-90's as a hobby, and I'm a little ashamed to say this, but this is my longest running one ever. I have a bad habit about losing interest or moving onto something different from time-to-time. 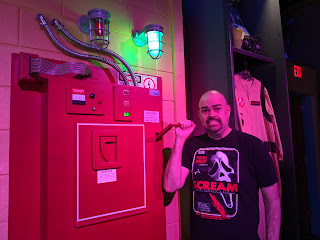 I live in North Carolina, I'm engaged, and hope one day to finish an actual horror story, possibly a screenplay or short story.

What was your first horror movie?
The first horror movie I recall seeing was 1990's Popcorn. Popcorn definitely played a role in developing my fascination with horror, but I also credit my mother's love of urban legends and my viewing of Halloween as what really drove me to seek out the macabre.

What is your favorite scary movie?
This is such a difficult question for me as I don't really have a definitely favorite anything. But, for the past several years, I've been set on saying Evil Dead (2013) is my favorite horror movie. It just checks all the boxes for me. Of course, I absolutely adore Halloween (1978) so it's hard for me to not mention it when discussing favorite movies.

What is your favorite horror franchise?
I think quality wise, I'd have to say Final Destination is one of the franchises that holds up the best for me. I also truly love the Scream franchise (I love Scream 3 a little less) and of course, Halloween (minus the Rob Zombie flicks.).

Freddy, Jason, Michael, Pinhead, or Ash?
Gotta go with my boy Michael here. Anytime he's in the line-up, it's always gonna be him.